Migration Safari – Drive or Fly to the National Park?Top 5 Tips to Experience a Wildebeest River Crossing

Migration Updates – Where are the Wildebeest Herds?

Feb 2019 Migration Updates: The herds moved to lakes Ndutu and Masek early this year with some good numbers around both lakes, as well as the small and big marsh areas.  Good numbers of wildebeest were reported around the smaller hidden valley lakes and ponds throughout January 2019.
The short rains delivered some really good early rains across the Serengeti plains. The fresh new good grass following the rains, ignited the calving season and little wildebeest calves have been born throughout the ecosystem.  The traditional special camp sites around campsite valley, Ndutu, Ndutu Safari Lodge, Alex Walker’s Serengeti South Camp and Nomad’s Serengeti Migration Camp have all reported wonderful sightings of predator interaction and new wildebeest arrivals.

We believe the short rains have stopped and this means the plains will dry out fairly quickly and the wildebeest herds would shift towards more permanent water sources.  The western herds would move to Maswa and Kakessio so Alex Walker’s camps and Kusini based camps would be in a good position. There might be a shift towards the eastern boundary of the Serengeti National Park this year in the region towards Gol kopjes and Nasera rock or Piyaya area.

GMC Mobile camp anticipates exploring the eastern plains and follow the eastern herds on their journey towards Namiri plains and Turner spring as the wildebeest head towards the Kenyan border and the start of their annual migration.  The GMC team will document dates and routes of the eastern herds this year. Traditionally these herds arrive at the Sand River first and cross into the Mara reserve first every year.  Join us on our journey following the great wildebeest migration 2019….

GMC mobile has a few spaces still available this March during calving season.  Please contact us for reservations and enquiries.  We follow the herds guaranteeing migration sightings all year round.  Make sure you are in the right place at the right time.  Game Package Rates $330 and Full board Rates $230 (excl Park Fees and getting there). 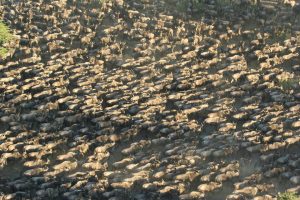 Thanks Serengeti Balloon Safaris for the update. Ndutu is full of wildebeest!
“Today we flew for just over an hour and were in sight of the herds throughout, not to mention the accompanying zebra, as well as 2 serval cats, lions on a kill, eland, thomson’s and grants gazelle, ostrich, and jackals. Well done Capt Masudi and the rest of the team, a top day!” See post here

Herds arrive at Lake Ndutu – update from Serengeti Nomad.  Migration in ndutu following rain storm 3 days ago! Herds are in open plains at shamba la maharge moving towards naibatat hill and albida plains ! Some are moving along the lake masek into woodland! Big time for cats as they are every where. See post 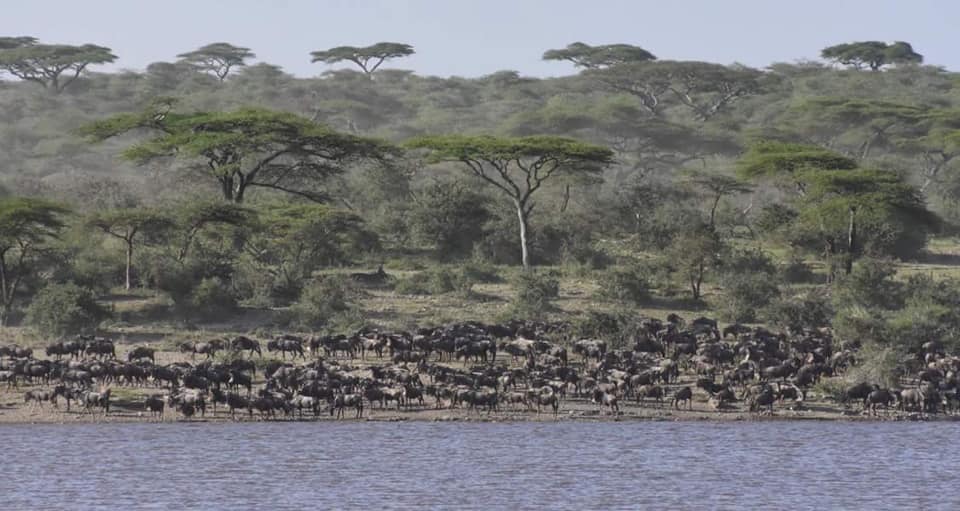 Is this the first new-born wildebeest of the 2019 calving season? Probably not but certainly the first picture of one thanks to Serengeti Nomad . See post 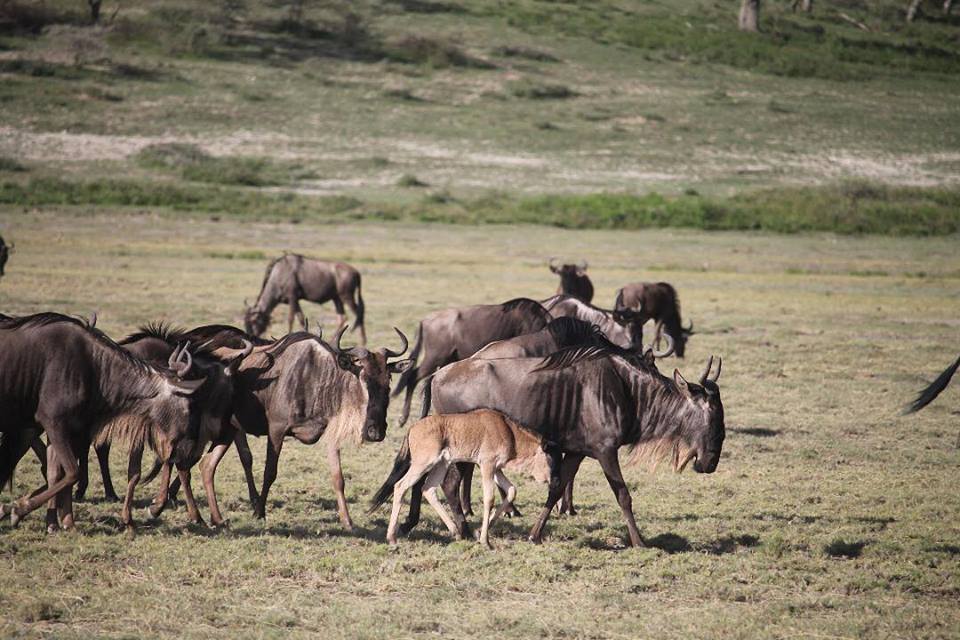 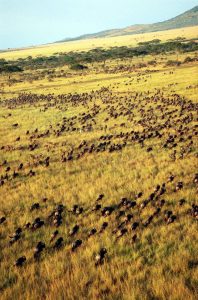 Update from Serengeti Balloon Safaris– herds gather on the southern plains from Naabi to hidden valley and across into NCCA. “A magnificent day to take a balloon flight over the Southern Serengeti with Serengeti Balloon Safaris, with light winds and partially cloudy skies both balloons calmly lifted off from our Ngorongoro Conservation Area site and floated west over the plains towards Lake Ndutu. What a spectacular view to see the great migration that seemed to have increased by the tens of thousands today! They have littered the short grass plains of the Southern Serengeti from Naabi Hill to Hidden Valley throughout the Ngorongoro Conservation Area and as far as the eye could see. Though the plains were dominated by The Great Migration some of the other wildlife we experienced included Jackals, Secretary birds, Vultures, Ostrich, Hyenas, thousands of Thompson’s and Grant’s gazelle and many Giraffes.”

And we have a zebra crossing on the Masai Mara side… The rest of the wildebeest are around the central to Southern Serengeti.. Update by Angama Mara thank you!

Lake Ndutu crossings and herds between Naabi hill and Ndutu, marshes and the southern plains.. Thanks for the update Serengeti Nomad .  “Migration is in ndutu , today we were lucky to watch migration crossing lake ndutu towards the woodland goinginto the open plains on the north east side of ndutu area like going to golini and gol mountains @nonadtanzania #migrationupdate #herdsonmove”  See post 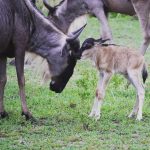 Baby time at Ndutu.
Thanks to Chem Chem Safari Lodges – Tanzania Africa
Just love calving season on the Southern Serengeti Plains! And it’s not just the wildebeest.  Scroll down for some other amazing wildlife sightings this month! Seeing is believing.

Am I a wildebeest?? Where are we going?? Can I come with you to Kenya…. Please?
Lowis & Leakey· The wildebeest seemed as shocked as Ninian was to find a hippopotamus way out on the short grass plains near Barafu. #lowisandleakey #hippopotamus #migration #namiri #tanzania

Calving season has started at Ndutu and the greater NCA and Southern Serengeti plains. Yehhh a new generation of migratory wildebeest on their way. Thanks for the update Serengeti Nomad . #GreatMigration #TheGreatMigration
#SerengetiShallNeverDie  #GMCMobileCamp 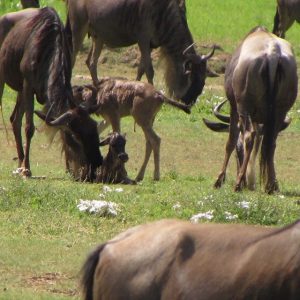 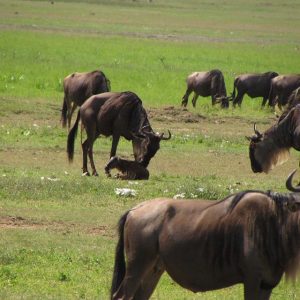 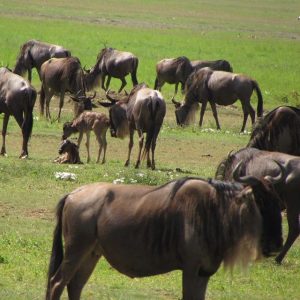 Too cute from Serengeti Nomad calving season underway… Early at Ndutu this year, might there be a shift to Maswa or Piyaya this year?

Other Amazing Sightings Reported from the Serengeti…

PLEASE enquire early to avoid disappointment particularly during peak periods- additional services are also busy and booked. We can assist with pre or post safari tours and accommodation in town as well as flights or transport in and out of the National Park.  We recommend 5- 10 days for your migration safari. Join us now for Calving Season; in June for Rutting season or between July and October for Crossing season. Email your inquiry to info@greatmigrationcamps.com. Kindly provide your name, country, number of people travelling and preferred dates and duration.  Children of all ages are welcome.