We’ve all heard stories of infamous and death-defying ascents on well-known peaks such as Nepal’s Mount Everest. Yet, as these stories prove, Africa’s highest mountains have played host to some of its own courageous (and outrageous!) journeys.

While he didn’t “defy death”, there are few more inspiring mountaineering tales than that of Kyle Maynard, a 27-year-old American quadruple amputee who scaled Kilimanjaro in Tanzania in 2012 without prosthetics. 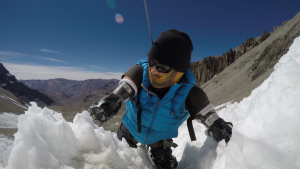 Born with a rare condition that meant he lived without the lower part of his arms and legs, Maynard learned to walk, eat and write unassisted. He went on to play American football in his school days, was on the wrestling team and could bench-press more than 108 kg. His New York Times best-selling autobiography No Excuses led to speaking engagements on Oprah and Larry King Live — but Maynard wasn’t finished blasting through his personal goals. On 15 January 2012, he became the first quadruple amputee to reach Kilimanjaro’s summit without assistance in 10 days, “bear crawling” all 5895 metres on specially-made soles.

He continues to work as a motivational speaker and professional mixed martial artist, and last year summited Argentina’s Mt Aconcuagua (at more than 6,961 metres).

The climbing prisoner of war

Perhaps one of the strangest mountaineering stories of all time comes from Mt Kenya: in January 1943, Italian diplomat Felice Benuzzi broke out of his British prisoner of war camp (where he’d been imprisoned for two years following his service in Ethiopia with the Italian Colonial Service).

Crushed by the tedium of camp, Benuzzi and two fellow prisoners decided to escape. “To break the monotony, I need only to start taking risks again,” he wrote in a 1952 book. And so, Benuzzi began to plan: hoarding food, making ice axes from stolen workshop hammers and fashioning crampons from odds and ends salvaged from the garbage. He sketched the mountain (his only maps) and undid the netting of a bunk bed to make a 10m-long rope. Leaving a note for the camp commandant promising that they would return, he and two others (a doctor-mountaineer and a perceived madman who would distract any who looked at the group too closely) used a key to slip out of camp.

For 18 days, they climbed to Mt Kenya’s 5,199m summit, planting an Italian flag and sealed brandy bottle with a note inside listing their names. Victorious, they descended and slipped back into camp without being seen until roll call that night, when they were given 28 days in cells for their prank. The commandant, however, appreciated their “sporting efforts” and so, they only served seven of those days in confinement.

In 2014, after a six-day climb, San Francisco native Neal Gottlieb planted a rainbow flag at the 5,109m summit of Mt Stanley, in protest of Uganda’s new laws against those who identify as lesbian, gay, bisexual and transgender (LGBT). The anti-gay legislation introduced in 2009 initially proposed the death sentence for homosexual acts but amended punishment for “aggravated homosexual acts” to life in prison. 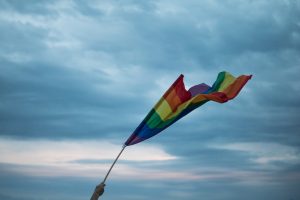 “No forest can be grimmer and stranger than this,” wrote Dr Filippo de Filippi in his epic account of the first Rwenzori expedition, led by Italian mountaineer and adventurer, Prince Luigi Amedeo of Savoy, Duke of the Abruzzi, in 1906. The avid mountaineer led expeditions to the Arctic (losing two fingers to the cold), Chogolisa in Pakistan (where he set a world altitude record) and sixteen summits in the Rwenzori range, including the six principal peaks.

When Abruzzi traversed the range more than a century ago, its jagged ridges were painted with snow and glaciers — he estimated they covered nearly 6.5 square kilometres. Abruzzi found a nine-storey-high wall of ice known as the Speke glacier, named for the British explorer who discovered the source of the Nile at Lake Victoria, John Hanning Speke.

Yet in 2010, less than 1.3 sq. km. of glacier remained in the Rwenzori. The effects of climate change have been acutely felt on Mt Speke’s 4,890m summit.

These are four of the peaks the 7 Summits Africa Challenge team aims to conquer in their world-first 7 mountains in 7 weeks for 7 causes expedition. Here’s why they’re doing it.